Is Morning Wood The Secret For Men With Low Testosterone 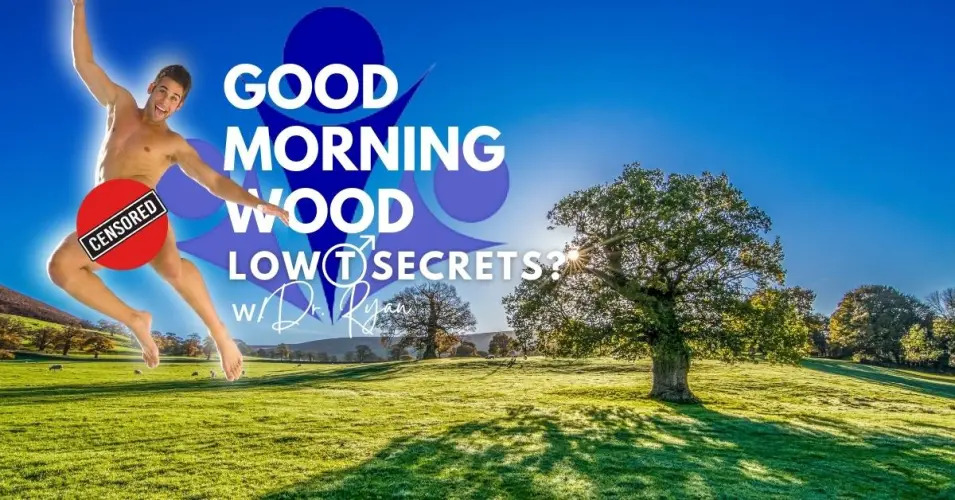 Morning wood could be the key to male virility, vigor, and longevity. Good morning erections begin early in childhood for guys as a way of preparing the penis for a life of love. You wake up from a deep sleep to notice that every part of you has been relaxed and resting except for one thing: your penis Middle-of-the-night erections—also known as morning wood, since you often notice them when you awake—are pretty damn common. In fact, they should be.

Many of you, though, may have observed that you no longer experience morning erections. Continue reading if you’re looking for a natural solution to fix your morning wood and regain good morning erections. In this post, I’ll reveal everything you’ve always wanted to know about why guys have erections in the morning and the secrets that a morning erection hides.

Why do men get erections in the morning?

Morning wood is a slang term for nocturnal penile tumescence. This occurs when someone with a penis gets an erection in the middle of the night or the early morning hours while they are sleeping. If you have morning wood, you may often wake up with an erection.‌

Another name for morning wood is morning glory. This term is primarily used in the UK.

Morning wood is a sign of a healthy man. nocturnal penile tumescence and rigidity (NPTR) monitoring is considered to be a valuable tool in the assessment and management of erectile dysfunction (ED). NPTR is an objective, noninvasive measure of erectile activity and is an integral method in differentiating between organic and psychogenic causes of impotence. NPTR testing also plays an important role in the assessment of pharmacological therapies and technological advances in the analysis and treatment of impotence.

“For individuals suffering from a condition that affects their sexual function, receiving an accurate diagnosis is an important first step in the process of pursuing treatment.”

The hormone testosterone, which is highest in the morning, has been proven to increase the frequency of nocturnal erections. Surprisingly, testosterone appears to have little effect on visual sexual stimuli or fantasy-induced erections. The brain’s “reward system,” which secretes dopamine, is primarily responsible for these.

For almost a century, low testosterone symptoms have been one of the most popular men’s health topics. It’s most well-known for its use in bodybuilding and sexual performance. A man’s health will spiral out of control without Testosterone. When a man has too much testosterone, he becomes a danger to himself and everyone around him. The most controversial, misunderstood, and generally worshipped component of what transforms a boy into a man is testosterone, which is second only to opioid pain medication.

Let’s start at the beginning. Testosterone is produced in the testes of all males- beginning even before birth. During fetal development, testosterone kickstarts the development of the male internal and external reproductive organs.

Let me back up even further just to clarify that we’re talking about testosterone, which is a hormone present in both men and women, but more prominently in men. Hormones are part of what’s called the endocrine system: which is responsible for maintaining stability throughout the human body, such as your metabolism or blood sugar. But because testosterone is so impactful to a man’s sense of identity, sexuality, and health, it has been given a special kind of celebrity status.

Men go through an entire hormone cycle every 24 hours of their life. This cycle starts with a proper full night of sleep. From the moment a man begins his first sleep cycle, his endocrine system begins activating the systems responsible for maintaining systemic balance. The testes will work throughout the night to replace the prior day’s testosterone losses. After sleeping for six to eight hours, most men will experience the full effect of their peak testosterone levels which commonly results in what the medical profession refers to as Nocturnal tumescence- the phenomenon more commonly called “morning wood.”

Which brings us to the first potential point of failure for nearly all men at some time during their lives. When was the last time you woke up with a full, rigid and often intrusive erection before work? If you can’t remember, your testosterone may be the culprit.

Low testosterone, medically known as hypogonadism, is a condition in which the testicles do not produce enough testosterone. It is most commonly attributed to the aging population of men. But older men aren’t the only ones affected. Testosterone production begins to tail off by the age of 30 in most men, but in recent years has been trending towards affecting even teenagers.

Primary hypogonadism is traced to a physical problem with the testis, such as radiation, traumatic injury, to much iron in the bloodstream, or the mumps virus.

Secondary hypogonadism is traced to a an endocrine imbalance that originates in either the pituitary gland or hypothalamus. With this form of low testosterone, the testicles are normal, but the gland problem impedes testosterone production.

Causes may be genetic, cancerous, related to inflammatory or autoimmune diseases, obesity, toxicity, and age.

While secondary hypogonadism and toxicity might logically be reminiscent of drinking alcoholic or caffeine beverages, this is one unique exception-albeit short lived. Caffeine and alcohol actually raise a man’s testosterone level for a short duration prior to the subsequent elevated glycemic concentration and filtering.

Deserving it’s own sub-category of secondary low testosterone symptoms, the use and abuse of testosterone in the form of anabolic steroids can result in its own unique set of male fertility problems, such as;

When you have low T, your levels of testosterone, the male sex hormone, fall below normal therapeutic range. When this happens, it may have an impact on your sexual life- such as possible that your sex drive will decrease. Additionally, you may develop erectile dysfunction (ED).

But to say that low testosterone causes Erectile Dysfunction is a stretch. Low testosterone does not commonly occur independent of other conditions. While there are several biochemical processes that would be impaired in the absence of testosterone, the functional interaction between testosterone and initiating an erection occurred because testosterone rapidly increases the availability of endothelial nitric oxide. To put it plainly, nitric oxide is the fuel that in the presence of a snark will open the arteries of the penis. Where the Erectile dysfunction begins is when the arteries fail to respond to the biochemical cascade.

When it comes to low testosterone symptoms and your endocrine system, the bottom line is balance. Having good morning erections is a clear indication of good health.

No morning erections is a sign of trouble that men should not ignore.  Getting your Testosterone labs tested or talking with the doctors at Health Expressions are two great ways for you to take that next step.  Call now- (301)244-4717

Does Morning Wood Have A Secret Meaning For Men?

Nocturnal tumescence is the medical term for the nighttime swelling of a man’s penis. Nocturnal tumescence is one of the most common male sexual health issues and is a very normal occurrence in all men, regardless of age or lifestyle choices. The health benefits of this type of nighttime erection are twofold: First, it helps to keep the blood flowing throughout the body, which can be especially helpful for men with erectile dysfunction (ED). Second, it also prevents the buildup of plaque in the arteries, which helps prevent heart disease.